New releases of sneakers come out almost every week, making it exciting for consumers to try and get the shoes that they like, especially the people who collect sneakers. But time after time again it’s been a challenge getting the shoes off for retail price because of resellers and their bots that are generated to automatically bid as much as they can to get the new release.

Apps like the sneaker app and NIKE have controlled raffles so the consumers can put their name in in order to get selected for a guaranteed opportunity in buying a shoe for retail price even if they are sold out quickly.

The user above has tried using the sneaker app to get a hold of the shoes that are shown. The shoes are called Carpet Company X High Dunks which came out March 12, 2021 at 10 am. Everyone logs into the app to submit their selections for an opportunity to receive the shoe but unfortunately for this user he did not get the shoes. The letter “L” means a loss to sneakerheads who weren’t picked to get access to the shoe.

Being able to get your hands on a new release is what the people into fashion call a blessing. Users understand that these shoes are limited and are worth more than the company itself sells them for. Six Figure Sneakerhead reports that the raffles Nike and other retail companies put up on their site for customers are to give them the opportunity to just pay the retail price for the shoe instead of paying a ridiculous price from resellers.

Instead of some using the raffle way they would rather go to the store itself and stand online hoping to still pay the retail price. This is all to avoid the price of others selling recent shoes for hundreds of dollars. 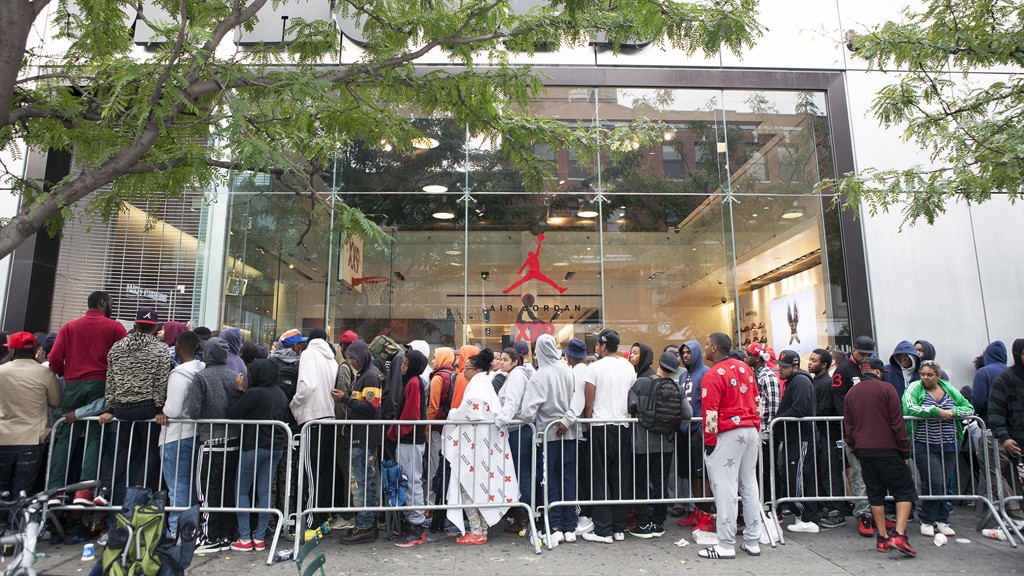 “Have ever seen people lining up, possibly for hours to get a the new iphone. Well that is nothing compared to the sneaker world as some people actually wait days. That’s right, days!” – Six Figure Sneakerhead

A FootLocker worker on 14th St explained how the store would get hectic every time a shoe came out. “They don’t know how to act when it comes to situations like these, they would rather stand outside day and night then pay a resellers price. Sometimes it’s just resellers.” He states that resellers would buy 5 – 10 pairs at a time because they understand the value of the shoe and how much people would die just to get them. They take advantage of the opportunity and resell it for either three times its actual price to consumers who have lost luck on getting the shoe.

Timothy Isaac purchased his shoes from a “plug” which in other words is called a personal reseller. The shoe retail price is $200 but Timothy bought it for $550 of of his personal reseller. Many like Timothy have chosen to just pay the price people are selling it for just so that they can finally have the shoe. “I was furious because it is not fair, regular consumers don’t even get the chance to have an eye out for shoes because resellers are already one up against us.” Many continue to go along with the cycle the sneaker industry has laid out for them, but they still do ask when resellers will be stopped for taking over the sneakers no one else can seem to get.

This may be a good place to introduce yourself and your site or include some credits.